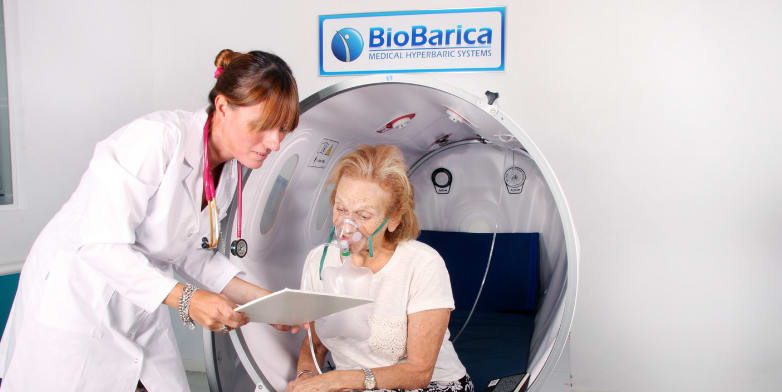 17.December 2018 By BioBarica Pacientes Comments are Off

Hyperbaric oxygenation therapy (HBOT) is a non-invasive medical treatment that involves the administration of oxygen at high concentration (close to 100%) inside a hyperbaric chamber where the pressure is higher than the normal atmospheric pressure (1 atm).

Under normal conditions, oxygen is only transported by hemoglobin within the red blood cells. The hyperbaric chamber also allows to dissolve it in the blood plasma (blood fluid). This produces a hyperoxia in all the tissues of the organism and reaches the circulatory vessels of smaller caliber, where a red blood cell would not fit.

Hyperbaric oxygenation is used as a primary treatment in some pathologies, or in synergy with the usual therapy for pathologies that develop with an inadequate use and supply of oxygen to the tissues.

The physical-chemical foundation of the therapy is based essentially on two physical laws that describe the behavior of gases. Dalton’s Law states that, at a constant temperature, the pressure of a mixture of gases is equal to the sum of the partial pressures (Pp) of each of the gases that compose it. Therefore, when administering high concentrations of O2 at a pressure greater than 1.4 atm, a Pp of O2 is obtained in the body many times greater than under normal conditions (breathing normal air, 21% of O2, at 1.0 atm).

Henry’s Law states that gases dissolve in liquids when under pressure. This implies that the O2 administered in a pressurized environment dissolves or distributes in the plasma and in the liquids with which the gas is in contact.

These are some of the most frequent questions about treatment in a hyperbaric chamber:

For what pathologies does it work?

Hyperbaric oxygenation treatment is applied in different pathologies of different specialties such as rheumatology, traumatology, neurology, medical clinic, and oncology. To know its effects in each, enter HERE.

Hyperbaric oxygen therapy has been used since the 19th century. In 1830 France led the development of hyperbaric medicine. It is currently used for the treatment of many pathologies in countries such as the United States, Canada, Australia, and Japan. It is present practically throughout Europe, Asia, and Latin America. To learn more about the history of hyperbaric medicine, enter HERE.

As it is a medical treatment, it must be prescribed by a medical professional or specialist. To know the indications, enter HERE.

Hyperbaric chambers have any risk?

No. In BioBarica we work with technology chambers. The chambers we use pressurize with air (non-flammable gas). This way we achieve the desired pressure avoiding all existing risks.

Are there any contraindications?

There is no strict contraindication to the application of HBOT. Some conditions require greater attention and care, including the presence of a pneumothorax with a valvular mechanism, the existence of thoracotomies, a history of spontaneous pneumothorax, or hypersusceptibility to convulsive episodes, as well as infectious and catarrhal diseases of the upper respiratory tract, Flatulent dyspepsia, and acute or chronic septations. However, by adopting the necessary precautions, all these conditions can be overcome without major problems.

Does the session in hyperbaric chamber generate discomfort?

The chamber session can last between 60 and 90 minutes depending on the medical prescription. Some people may notice that the ears are covered during the first minutes of the session (pressurization) and in the last (depressurization). It is a nuisance similar to that suffered in an airplane flight and must disappear by performing the maneuvers indicated by the chamber operator.

How many sessions should be done?

Claustrophobia is not a contraindication. The hyperbaric chambers of BioBarica are equipped with ten windows with a wide visibility and a system of valves for opening and closing from the inside so that the patient feels calmer since they can be opened from the inside.

Should I use some kind of special clothes for the session?

It is not necessary to use any special clothes. The most advisable is to wear comfortable clothes. Shoes must be removed.

Can you enter accompanied?

When the patient is a child, he can be accompanied by a relative. In that case, the child receives the treatment through the mask and the adult only accompanies it and contains it during the session inside the chamber.

When do the effects of treatment begin to be felt?

The benefits are obtained from the first session. The usual thing is that you do not notice any objective sensation at the beginning. Some patients can quickly appreciate that they rest better and get up with more energy. Depending on the pathology, improvement will begin to be noticed.

Hyperbaric oxygenation treatment accelerates wound healing times; produces angiogenesis (which is the stimulation of blood vessel formation); favors the detoxification of gases and toxins; accelerates the rehabilitation processes in injuries of ligaments, bones, joints, muscles and nervous tissue; stimulates the differentiation of bone-forming cells, favoring osteogenesis and bone repair; intervenes in the regulation of oxidative stress or cellular wear in chronic diseases; reduces muscle fatigue; and it increases the energy at the cellular level.