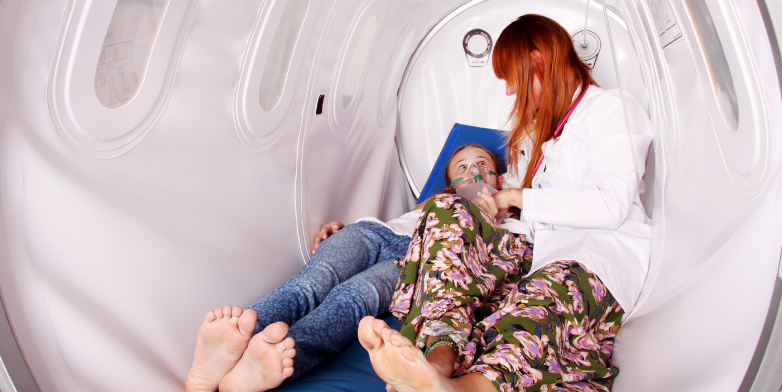 It is the non-invasive method of hyperbaric oxygenation. It is indicated for autism, cerebral palsy and headaches, among other pathologies. In the long term, it offers obvious benefits in the improvement of motor function.

Childhood neurological disorders are diseases of the central and peripheral nervous system that affect the brain, spinal cord, nerves and muscles of the child. They can be congenital or from birth, by inheritance, caused by trauma, by exposure to toxic chemicals, tumors, and infections.

Among the most common childhood, neurological conditions are:

Cerebral palsy: is a permanent condition caused by a neurological injury in the prenatal period. It is the most frequent cause of disability in childhood. It has a prevalence of 2 to 3 cases per 1000 newborns. Children with this condition have motor impairments (it is more difficult for them to sit, crawl, stand, walk) and may have difficulty swallowing, cognitive delay, visual or hearing problems, epilepsy and communication deficiencies.

The autistic spectrum: is a group of developmental disorders that include autistic disorder, Asperger’s syndrome and generalized developmental disorder not otherwise specified (PDD). Children with this condition may show a lack of interest in other children, difficulty in establishing eye contact, avoid physical contact, use a literal language and perform repetitive and self-stimulating movements such as swinging, fluttering of hands or walking on tiptoe, among others.

Headache: is defined as pain or discomfort referred to the head. It is a very frequent reason for consultation in the pediatric age, both in primary care and in the emergency services. It is estimated that it represents between 1 and 2% of emergency visits and it is confirmed that 5 out of every 100 children of school age suffer headaches with relative frequency.

How are these neurological conditions usually treated?

Conventional therapy for childhood neurological disorders is multidisciplinary and may include early stimulation, language therapy, occupational therapy, psychopedagogy, psychological therapy, support in reading and writing, rehabilitation of attention disorders and family therapy, among others. Once the diagnosis is defined, the doctors will indicate the most appropriate treatment (s).

Several studies in different parts of the world showed the benefits of the use of hyperbaric oxygenation therapy in several conditions of child neurology.

In 2014, researcher Arun Mukherjee4 and his team presented convincing evidence that, in combination with standard intensive rehabilitation (SIR), hyperbaric chamber treatment can be an effective neuro-therapeutic method for children suffering from neurological dysfunction due to cerebral palsy. The most relevant aspect of this study is that the long-term results were very beneficial, specifically in the improvement of motor function.

On the other hand, BMC Pediatrics Research proposes this painless therapy for the treatment of autism. A randomized study of 62 children found that those who received 40 hours of treatment during a month were less irritable, more receptive when people spoke to them, had more eye contact and were more sociable than those who did not undergo treatment in a hyperbaric chamber. In the study, it was also observed that they were less sensitive since some autistic children experience a sensory overload due to loud noises and background noises.

That is, these studies proved that this type of therapy can mitigate the qualitative difficulties of social interaction, decrease lack of empathy and social reciprocity, improve the ability to recognize, respond to gestures and expressions and improve communication and flexibility in reasoning and behavior.

According to doctor Leonardo Ramallo, BioBarica doctor and specialist in psychoneuroimmunoendocrinology, “The use of hyperbaric chamber stimulates the growth of nerve fiber in the brain and the rest of the body, decreases inflammation, promotes oxygenation and neuronal function, maintains the integrity and protection of the brain and nervous tissue and increases blood flow in the brain. These effects are only achieved with treatments carried out in the chamber at less than 2 atm, because in this way it is possible to achieve oxygen diluted at a suitable dose and non-toxic for the rehabilitation of neurons “.

Likewise, the group of researchers of Dr. Paul Harch5 in several scientific papers and in his book “The oxygen revolution” details his experience with the treatment of hyperbaric oxygenation in the rehabilitation of cerebral hypoxia in children due to drowning, severe hypoglycemia and severe brain traumas. In addition to children with cerebral palsy and autism. The conclusion is that this therapy achieves progress in rehabilitation, even after the injury or accident in the brain, and also reduces the symptoms of late post-brain injury syndrome.

Clinically hyperbaric oxygenation therapy has also been reported as a successful treatment for a headache since at least 1989. It is applied to migraines because it deflates neuronal tissue, redistributes brain flow, reduces inflammation and edema and decreases symptoms and episodes.

Treatment with Hyperbaric Oxygenation (HBOT) is a non-invasive method that consists in supplying oxygen at high concentrations in a pressurized hyperbaric chamber at a minimum of 1.4 ATM atmospheres (higher than the normal ambient atmospheric pressure of 1 atmosphere). Thus, the person is breathing oxygen close to 100%. Inside the camera, children can be accompanied by adults and enter with objects to achieve a pleasant stay.