Homeespañol ingles 5 HBOT applications that you may not know

5 HBOT applications that you may not know 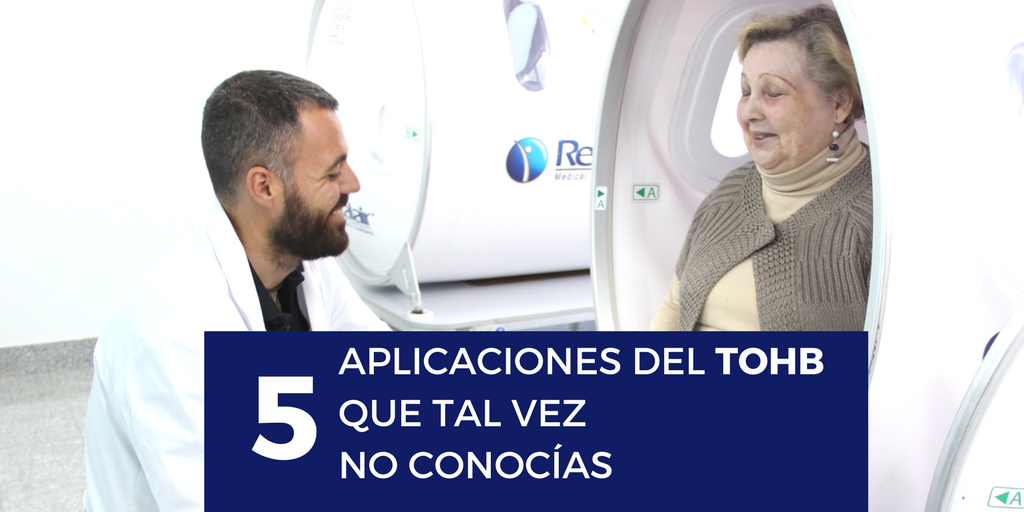 Hyperbaric Oxygen Therapy (HBOT) is a non-invasive method that helps in the recovery of a large number of diseases and has no adverse effects. Patients enter to a hyperbaric chamber pressurized to 1.4 atmospheres (ATM), higher than normal ambient atmospheric pressure, which is supplied with air and oxygen; thus it rises several times the oxygen in the tissues, reaching even those damaged. This is called hyperoxia and produces a lot of benefits within the body.

HBOT is indicated in a variety of cases, for example:

The experience and specific studies show an efficient response to the decline and disappearance of episodes of sleep apnea with the use of hyperbaric treatment in patients with this condition. Patients suffer an imbalance of carbon monoxide that the body expels when breathing; then, the hyperbaric oxygenation balance it and the irregularity is corrected. In just a few sessions, the patient achieves sleeping normally.

The beneficial effects of hyperbaric chamber are essential to recovery and to stop the progress of patients with Fournier syndrome because of its reconstructive and anti-inflammatory effects, high synergy with the action of antibiotics, increased bactericidal action of white blood cells and formation of collagen. It produces the healing of damaged tissues, increases blood flow from the formation of new blood vessels and the significant increase of oxygen in the damaged area by stimulating and increasing all cellular activity helping control and repair affected zone.

Hyperbaric oxygen is essential and very effective in reducing, eliminating or reversing the symptoms generated by fibromyalgia. Increased blood oxygen has inflammatory effects, stimulates healing and tissue repair process, and increases blood flow to peripheral level and central nervous system and acts on neurotransmitters. Because of these effects, treatment with hyperbaric chamber is increasingly used as part of treatment protocols for patients with fibromyalgia with excellent clinical results.

The hyperbaric chamber is commonly used in the treatment of lesions caused by radiation therapy or radiation. The significant increase in blood oxygen has inflammatory effects and collaborates in the recovery of tissues damaged by radiation. Furthermore, HBOT stimulates cells that produce collagen, promotes angiogenesis opening new blood vessels and stimulates the release of stem cells. The hyperbaric chamber is indicated in the treatment protocol of radiation injuries worldwide.

One of the causes of sudden deafness is poor oxygenation of the auditory nerve. The application of hyperbaric oxygen is an effective solution, with evidence of good clinical results. Increasing the oxygen carried by the blood reduces swelling of all body tissues; thus endolymph and oxygen circulation to the cells of the inner ear is stimulated. The symptoms diminish or disappear with a few sessions.