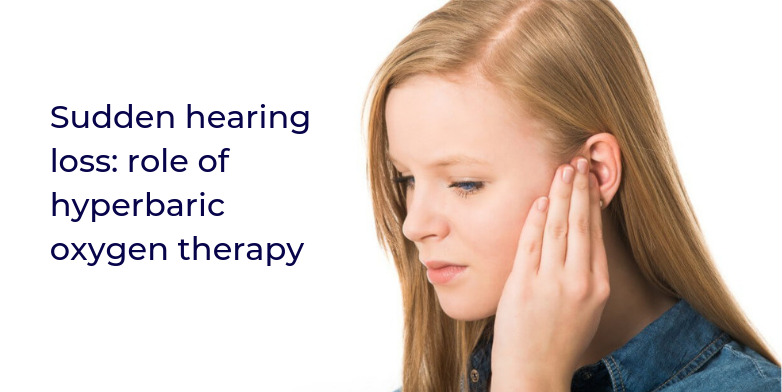 Sudden sensorineural hearing loss (SSNHL) is defined as an acute hearing reduction, typically unilateral, of 30 dB or more in at least three consecutive frequencies, occurring within 72 hours of symptom onset. It was first described in 1926 as Citelli’s acute cochlear block and is currently more commonly referred to as idiopathic sudden sensorineural hearing loss (ISSNHL).

There are approximately 5-20 cases per 100,000 people each year, and men and women are equally affected. Sudden hypoacusis can be caused by viral infections, vascular or metabolic problems, autoimmune diseases, or traumatic accidents. Due to the variability of the etiopathogenetic mechanisms, there is no single treatment of choice for sudden hearing loss, and the literature reports the use of many different drugs and therapies.

Hyperbaric oxygen therapy (HBO) is an option that involves administering 100 percent oxygen at a pressure greater than 1.4 atm to increase the partial pressure of oxygen within blood and capillaries, which stimulates oxygen diffusion from the capillaries into the surrounding tissue, including hypoxic parts of the cochlea. Moreover, it causes nitrogen bubble dissolution in the labyrinthine and cochlear artery. As a result, increased perfusion to the inner ear stimulates cell repair. In addition, research shows that hyperbaric oxygen therapy inhibits blood coagulation and pro-inflammatory cytokine production.

In the study “Sudden sensorineural hearing loss: the role of hyperbaric oxygen therapy”, researchers describe the case histories of 171 patients who were admitted to Ear Nose Throat (ENT) units of Cardarelli Hospital and University of Naples Federico II for sudden unilateral hearing loss between January 2009 and January 2016. Since October 2011, the hyperbaric oxygen therapy unit has been active.

Patients admitted before October 2011 (Group A: 85 patients) were treated with dexamethasone (8 mg, 1 vial/day intravenous), pantoprazole (40 mg vials, 1 vial/day intravenous in 100 cc of physiological solution), 10% glycerol (1 250-mL bottle/day intravenous with an infusion rate of 180 ml/h), and enoxaparin sodium (4.000 U.I. fl, 1 vial/day subcutaneous; only in patients >60 years of age). As home therapy, patients were given Methylprednisolone capsules (1 mg/kg/day oral, in progressively decreasing doses, i.e., halved every 3 days, for fifteen days) and ticlopidine capsules (1 capsule/day for a month; only in patients >60 years of age).

Patients admitted after October 2011 (Group B: 86 patients) were treated with the same medical therapy in combination with daily sessions of hyperbaric oxygen therapy for 90 minutes (every 25 minutes the patients had a period of break of 5 minutes in compressed air for 3 times), once a day for 15-21 days.

All patients regularly underwent clinical examinations and tests at the following times: daily during their stay in the hospital; when they finished home therapy; every three months for the first year; and every six months thereafter

Vestibular examinations revealed vestibular unilateral deficits in 19% of the patients, benign paroxysmal positional vertigo in 4% of patients, and central signs in 1% of the patients. They observed no cases of retrocochlear disease on MRI. Approximately 4% of the patients whose treatment included HBO had barotraumatic otitis; therefore, oxygen therapy was stopped for these patients. Long-term follow-up revealed that approximately 2% of the cases were in the initial stages of Meniere’s disease.

Sudden sensorineural hearing loss is a real medical emergency, but there is no consensus on its treatment, which changes according to the practitioner’s school of thought. The most of authors in literature seem to advocate high doses of corticosteroids at least for the first few post-lesion days. The aims of this research were to analyze the results obtained from treatment protocols involving medical therapy and hyperbaric oxygen therapy and to assess the influences on hearing recovery of factors such as gender, age, the time interval between onset of symptoms and initiation of treatment and the presence of objective vertigo.

This work revealed that 44.1% of the patients treated reported clearly satisfactory improvements in hearing. Factors predicting better results were: the time interval between the onset of symptoms and the initiation of treatment was ≤3 days; no objective vertigo or signs of labyrinth problems were present; the patient was younger than 50 years old; the audiometric pattern was upward or pantonal.

Gender was not found to have any effect on prognosis. In all cases, it is important to recognize these variables when a patient with sudden hearing loss is admitted to predict with some degree of certainty the type of results that are feasible with any given treatment. In conclusion, our treatment protocol for SSNHL provides for i) patients younger than 60 years: HBO, corticosteroids (unless contraindications), pantoprazole, 10% glycerol; ii) patients older than 60 years: HBO, corticosteroids (when it is possible), pantoprazole, 10% glycerol and enoxaparin sodium.