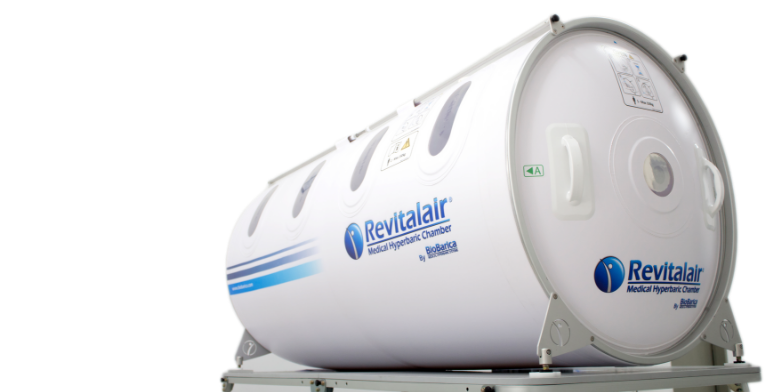 With Hyperbaric Oxygen Therapy (HBOT) at 1.45 atm, the minimum required P2O2 (20 mmHg) is reached and greatly exceeded to cover the minimum average penetration radius required to satisfy cellular functions (~ 40μm). The Krogh model explains the existence of radial and longitudinal pressure gradients (PpO2), as a function of capillary radius and arterial and venous ends, respectively.

From the combination of these variables, the model allows to predict the PpO2 in the tissues: when O2 is administered at a concentration close to 100% in an atmosphere at 1.45 atm, the penetration radius of O2 from the capillaries to the tissues is of ~ 75μm and allows to reach an arteriolar PpO2 of approximately 950 mmHg. This pressure is more than enough to ensure a proper supply of O2 to all the tissues of the body, through the diffusion and penetration of O2 from the plasma to all the cells.

It can be understood that the clinical and physiological benefits of HBOT manifest at 1.45 atm. In analogy with pharmacological therapies, HBOT should ensure that the level of O2 remains within the therapeutic window. That is, it exceeds the minimum threshold necessary to fulfill the vital functions of aerobic cells, without exceeding the concentration ceiling to avoid the toxicity associated with the excessive production of reactive O2 species (ROS).

The Revitalair® 430 hyperbaric chamber is a medical device used for hyperbaric oxygenation treatment at 1.45 atm. It arises from the combination of new technologies with an innovative design that uses materials and components that facilitate its use. It is basically composed of two parts, the cabin (with base) and the compressor.

The Revitalair® 430 chambers have ten transparent windows to allow the entry of light and 360º view for the patient, as well as the verification of their comfort from the outside. On the external upper side, they have two safety and exhaust valves, adjusted to a pressure of 1.45 atm, through which the air is supplemented by the compressor, maintaining an inflow of air that is renewed continuously at 140 liters per minute. Inside the chamber, patients breathe O2 in a concentration close to 100% (administered through a mask with a reservoir), in sessions of 60 to 90 minutes, three to four times a week according to medical advice.

Wounds: in particular, HBOT is widely used for wounds with healing problems. Among them, we can mention burns, diabetic foot, and chronic peripheral vascular obstruction and varicose ulcers. HBOT for the diabetic foot is indicated in wounds that meet an established classification (Wagner grade 3 or higher) with certain characteristics (ulcer that penetrates the tendon, bone or joint, presents abscess or gangrene and has not shown measurable signs of healing).

HBOT reduces mortality and the rate of amputation in necrotizing infections (necrotizing fasciitis, Fournier gangrene, gas gangrene) as adjuvant therapy with antimicrobial treatment and emergency surgical debridement. It is also effective for infections that compromise bone and pathologies such as osteomyelitis. HBOT is also indicated as a healing therapy in ulcers, vasculitis of other etiologies, burns, and compromised dermal grafts and flaps.

The objective of therapies in cerebral ischemia is to rescue normal tissue, which is at risk of suffering irreversible damage due to O2 deprivation and the consequent energetic and metabolic alteration. HBOT allows reducing the inflammatory state and cerebral edema, favoring the repair of axons and stimulating their growth, and maintaining the integrity of the blood-brain barrier. This attenuates motor deficits, decreases the risks of sequelae and prevents recurrent cerebral circulatory disorders, improves survival after neurological trauma and accelerates the regression of atherosclerotic lesions by promoting antioxidant defenses.

It was also observed that HBOT accelerates neurological recovery after spinal cord injury, improves mitochondrial function in the motor cortex and spinal cord, reverses hypoxia and reduces edema. In cases of traumatic injury affecting the central nervous system, HBOT promotes angiogenesis, neuroprotection, and neurogenesis. In addition, it improves cerebral blood flow, favors neuroplasticity, and contributes to rehabilitation in patients who suffered a stroke.

In autism, HBOT reverts hypoperfusion and hypoxia, by increasing the tension of O2 and its gradients, with the consequent improvement in tissue oxygenation, decreased edema and stimulation of angiogenesis. Moreover, it reduces mortality and neurological sequelae in neonates with ischemic encephalopathy. These benefits are manifested finally in the motor, cognitive, neuropsychological function and in the connection and communication ability of patients in the long term.

Oncology: Both radiotherapy and chemotherapy recommend the use of HBOT before or after the primary treatment of the tumor, but always with a narrow temporal margin. In the case of sensitization to chemotherapy, it was observed that HBOT resolves the resistance and increases the cellular sensitivity of the tumors. This effect is due to the reversal of hypoxia and the increase in the production of free radicals, which favors the incorporation of chemotherapeutic agents in the treatment of breast tumors, osteosarcomas, ovary, lung, and gliomas.

The use of HBOT to treat necrosis of bone tissues (mostly jaw and teeth), soft subcutaneous tissues, larynx, intestine, abdomen, bladder, rectum, thorax and limb wounds caused by radiotherapy is also widely documented. This effect can manifest itself some months, and even years after radiotherapy, given the lack of specificity and selectivity of the radiation on neoplastic tissues and healthy tissues. In these cases, HBOT acts on necrotic tissues and on different organs damaged by radio-lesions through the induction of angiogenesis and the reduction of fibrosis, which favors healing.

Sports medicine: in sports medicine it is used in the physical preparation of the athlete for high sports, physical and muscular performance; the recovery of physical exercise and the prevention of fatigue in periods of intense activity (before, during or after participating in competitions or tournaments); and the treatment and rehabilitation of traumatic injuries associated with sports practice. Hyperoxia triggers greater exercise tolerance and less physical and muscular fatigue, maximizes performance and shortens recovery time after exercise. In addition, HBOT allows greater and faster healing of damaged tissues, thus shortening sports downtime.

Hyperbaric oxygenation therapy is widely used successfully as primary and coadjuvant therapy in different pathologies. Its effectiveness is based on the generation of hyperoxia that allows different physiological benefits for the patient. The BioBarica Clinical Research Group † is constantly developing clinical evidence in different pathologies with an inflammatory component, due to the biological security and accessibility of the new HBOT chambers with Revitalair® 430 technology.