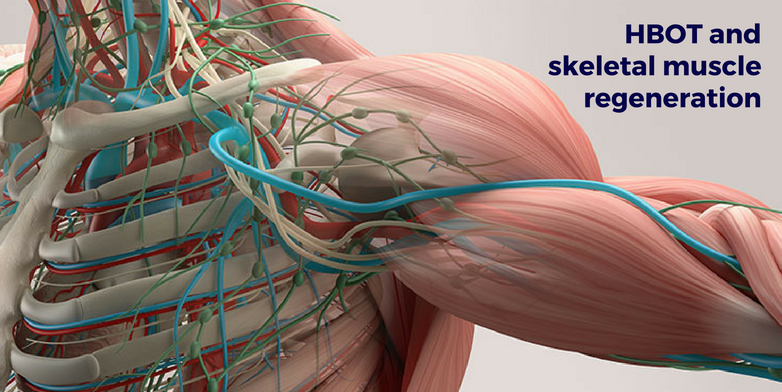 For this reason, in 2014 Naoto Fujita, Miharu Ono, Tomoka Tamioka and Masataka Deie, from Hiroshima University, conducted a study with the purpose to investigate the impact of hyperbaric oxygen at 1.25 atmospheres absolute (1266.59 hPa) with normal air on muscle regeneration.  The tibialis anterior muscle of male Wistar rats was injured by injection of bupivacaine hydrochloride, and rats were randomly assigned to a hyperbaric oxygen experimental group or to a non-hyperbaric oxygen control group. Immediately after the injection, rats were exposed to hyperbaric oxygen, and the treatment was continued for 28 days.

The number of Pax7- and MyoD- or MyoD- and myogenin-positive nuclei per mm2 and the expression levels of these proteins were significantly higher in rats exposed to hyperbaric oxygen than in controls 5 days after injury.  These results suggest that hyperbaric oxygen promotes skeletal muscle regeneration in the early phase after injury, possibly due to reduced hypoxic conditions leading to accelerated macrophage infiltration and phenotype transition. In conclusion, hyperbaric oxygen less than 2 atmospheres absolute with normal air is an appropriate support therapy for severe muscle injuries.

This study was approved by the Institutional Animal Care and Use Committee of Hiroshima University (A13–132) and was carried out according to the Hiroshima University Regulations for Animal Experimentation. All experiments were conducted in accordance with the National Institute of Health (NIH) Guidelines for the Care and Use of Laboratory Animals (National Research Council, 1996).