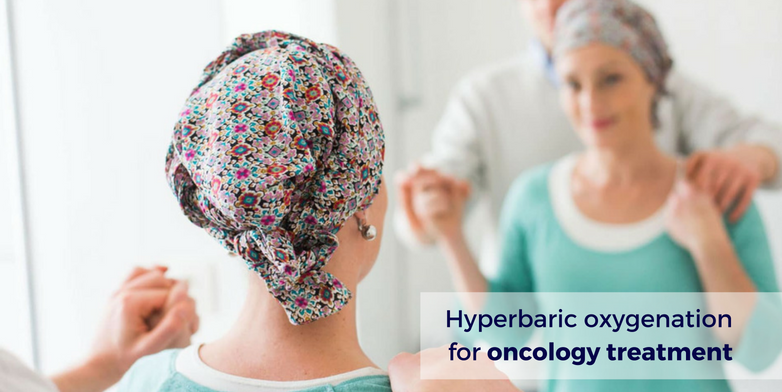 Hyperbaric Oxygenation Treatment is widely used for cancer patients or with lesions caused by radionecrosis (RN) caused by radiotherapy (RT). The following bibliographic review illustrates the use of HBOT for tumor treatment, highlighting its main effects and mechanisms of action.

To evaluate the beneficial effect of HBOT in the treatment of tumors, it is important to consider the following factors: the tumor entity, the degree of hypoxia, the site of implantation and tumor growth and the degree of vascularization of the tumor. All these variables affect the degree of efficacy of both conventional treatments radiotherapy and chemotherapy (CT) as well as the enhancing or sensitizing effect of HBOT.

HBOY acts therapeutically producing a state of hyperoxia in the body, capable of reversing the state of hypoxia, affecting the viability of neoplastic cells and achieving the desired therapeutic result. For example, HBOT can improve the effect of RT on hypoxic tumor cells, reducing tumor recurrence.

Most of the investigations available are related to cases of head and neck cancer. These type / s of cancer are characterized by being highly hypoxic and treated in a habitual and efficient way with RT. In almost all published works, the effect of HBOT as an adjuvant therapy enhancer of RT, mainly, and CT, to a lesser extent, is highlighted. In both cases, it is recommended to use HBOT in advance, or at most after the primary treatment of the tumor, but always with a narrow temporal margin.

For example, in the adjuvant treatment of tumors, the association of radiation immediately after the HBOT session (15 ‘) favors the regression of the tumor size and increases the survival in patients with glioma. A systematic review of 19 randomized clinical trials (almost 2300 patients) showed that the adjuvant action of HBOT together with RT improved the control of tumors in the head and neck and reduced the recurrence of cervical tumors.

In the case of sensitization against CT, it was observed that HBOT resolves the resistance and increases the cellular sensitivity of the tumors. This effect is due to the reversal of hypoxia and the increase in the production of radiolesion, which favors the incorporation of chemo-therapeutic agents during or immediately after the chamber session, in the treatment of breast tumors, osteosarcomas, ovary, lung, and gliomas.

Regarding the controversy over angiogenesis, available reviews indicate that there is no direct evidence that HBOT promotes angiogenesis in tumors. On the contrary, they indicate that HBOT is a safe practice in patients with cancer, which does not stimulate growth, metastasis or tumor recurrence. Furthermore, HBOT can have an inhibitory effect and reduce tumor growth in some types of cancer, such as breast cancer.

Regarding the controversy over angiogenesis, available reviews indicate that there is no direct evidence that HBOT promotes angiogenesis in tumors. On the contrary, they indicate that HBOT is a safe practice in patients with cancer, which does not stimulate growth, metastasis or tumor recurrence. Furthermore, HBOT can have an inhibitory effect and reduce tumor growth in some types of cancer, such as breast cancer.

The use of HBOT to treat necrosis of bone tissues (mostly jaw and teeth), soft subcutaneous tissues, larynx, intestine, abdomen, bladder, rectum, thorax and limb wounds, caused by RT is also widely documented. This effect may manifest itself some months, or even years, after RT, given the lack of specificity and selectivity of the radiation on neoplastic tissues and healthy tissues. The radiation of healthy tissues produces a tissue deterioration that may or may not be resolved physiologically.

When irradiation occurs for prolonged periods, or at high doses, it may not be resolved and produce endarteritis and decrease in the density of small vessels, replacing normal tissue with fibrous tissue. This process is prolonged to a certain extent in that the supply of O2 to the irradiated tissues is insufficient to allow its normal functioning, developing a context of hypoperfusion, hypoxia, and hypocellularity that progress to ulceration or tissue necrosis.

In these cases, HBOT acts in necrotic tissues through the induction of angiogenesis and the reduction of fibrosis, favoring healing and resolving necrosis. In this context, HBOT is used as a promoter of healing, so angiogenesis, in these tissues affected by necrosis, is a sought effect. A retrospective analysis of patients with necrotic wounds in extremities, produced by RT of soft tissue sarcomas, showed that adjuvant treatment with HBO was effective for wound healing.

In a retrospective analysis of 411 patients with radionecrotic lesions, HBOT produced positive results in patients with mandibular osteoRN, cutaneous NR with open wounds, laryngeal RN, gastrointestinal RN, and cystitis. It is important to mention that the compatibility of HBO in patients under anti-tumor therapy with doxorubicin, bleomycin, disulfiram, and cisplatin should be evaluated since pharmacological toxicity can be enhanced.