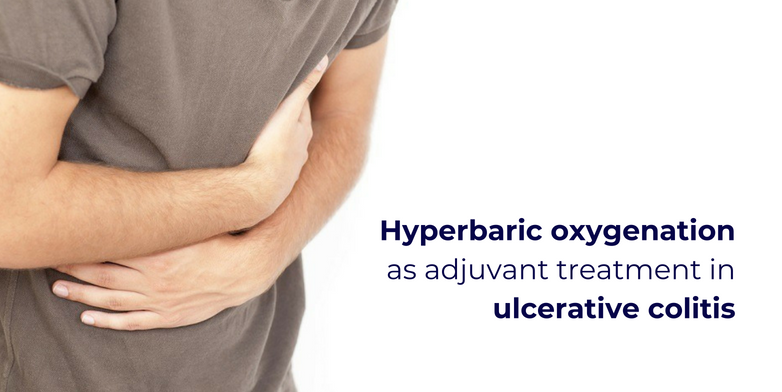 Along with Crohn’s disease, ulcerative colitis (UC) meets in the so-called inflammatory bowel disease. UC is an entity difficult to define, because its diagnosis depends on the concurrence of clinical manifestations and endoscopic findings. UC is an inflammatory disease of the large intestine of progressive, relapsing and remitting character, almost always chronic in course, and characterized by ulcerated lesions of the colon, which are accompanied by diarrheic stools with phlegm, blood and pus. The etiology of UC is unknown.

Hyperbaric Oxygenation Treatment (HBOT) is a therapeutic method that involves breathing oxygen at pressures above atmospheric pressure inside a hermetically sealed chamber. The therapeutic effects of HBOT are given by physical phenomena (pressure changes to which the subject is exposed in the hyperbaric chamber) and physiological (changes in the pressure of the oxygen breathed). Therefore, HBOT has the highest antihypoxic action known, and can improve fibroblast proliferation, collagen fiber formation, active neovascularization, and antimicrobial, antifungal, and antiviral defenses.

Depending on the dose of pressure, HBOT can exert an immunomodulatory or immunosuppressive effect. The presence of a Hyperbaric Medicine Service at the “Hermanos Ameijeiras” Clinical-Surgical Hospital in Habana motivated the conduct of a comparative study to evaluate the influence of HBOT on the clinical and endoscopic evolution of ulcerative colitis.

Forty-three patients diagnosed with UC were recruited. All were medicated with azulfidina: 4 grams daily, as recommended for this disease. The patients were divided into two groups. Those in Group A were treated with 15 sessions of HBOT each lasting one-hour, interspersed Monday through Friday. The treatment lasted 21 days. Group B was maintained only with azulfidine. The patients participating in the study were hospitalized in the Coloproctology Service for follow-up, evolution, and treatment.

In Group B (Control) modest improvements were obtained in the expression of pain, and in the presence of blood and pus in the feces, with respect to the observations made before the beginning of the study. Likewise, it was possible to reduce the number of daily diarrheas experienced by the patient. However, no changes were made in the frequency of the occurrence of phlegm in the feces. Changes in symptoms were more striking in Group A (Treatment). 100% of the patients with UC treated in HBO reported disappearance of pain at the end of HBOT sessions. Also, between 91.0 – 100.0% of the patients showed absence of the presence of phlegm and blood in the feces. The number of daily diarrheas was reduced.

In Group B (Control) modest improvements were achieved in the vascular pattern of the mucosa, and the occurrence of the presence of blood and pus, with respect to the initial observations. However, no changes were observed in the presence of mucosal ulcers and phlegm.

In Group A (Treatment) the changes were dramatic with respect to the vascular pattern of the mucosa, and the presence of blood, phlegm and pus: the endoscopic findings were ostensibly better between 91.3 – 100.0% of the affected patients of the group in question, after being compared with the initial observations. Although no mucosal ulcers were observed in 83.3% of the patients affected in this group in the endoscopic evolutionary examination, this proportion was not significantly different from the initial conditions. For any endoscopic finding, the proportion of improved cases was greater in Group A (Treatment).

In this paper it was presented evidence of the usefulness of HBOT in achieving improvement of clinical symptoms and endoscopically observable lesions in patients with UC. HBOT could serve to provide the patient with pain relief: one of the most striking symptoms of ulcerative colitis, and a continuous reason for requesting medical assistance. Second, HBOT would be useful to restore the vascular pattern of the mucosa, and with it, decrease in bleeding, which can become a cause of anemia, and force the medical team to adopt other therapeutic routes.

However, the authors conclude with a note of caution: the benefits reported with the HBOT do not mean in any way that the usual treatment is abandoned, or that it is intended to replace it. What is proposed is to put in the hands of anyone who can offer this service another element to consider in the therapeutic arsenal for the relief of a condition as invalidating as the ulcerative colitis.