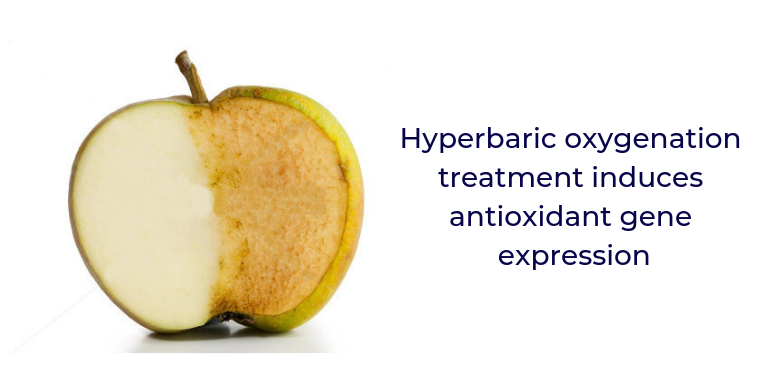 Hyperbaric oxygen therapy (HBOT) has recently been promoted as an approach to slow aging. HBOT is the medical use of oxygen at higher than 1 atmosphere (atm) of pressure. The therapeutic principle behind HBOT stems from increasing the partial pressure of oxygen in the tissues of the body. In addition, HBOT increases the oxygen-carrying capacity of blood plasma beyond those achievable under normobaric conditions. Currently it is used to treat CO poisoning, delayed radiation injuries, decompression sickness, as well as non-healing diabetic wounds and others.

Furthermore, HBOT preconditioning has been shown to have hormetic effects on stress resistance and can increase the longevity of C. elegans. Although the mechanism through which HBOT increases longevity is unclear, it is likely to be related to the fact that HBOT can induce low levels of oxidative stressors like ROS. This low level of ROS could be acting to induce protective gene expression and to help cells and tissues manage various environmental and endogenous stressors more efficiently.

Doctors from the department of Molecular and Cell Biology from the University of Connecticut, and the Department of Surgery of the Morristown Memorial Hospital wanted to address this possibility using human microvascular endothelial cells as their model system to study the effects of HBOT. These cells are a direct target of HBOT during wound healing, and previous research has shown that HBOT can increase growth factor expression within the wound site that in turn helps stimulate angiogenesis. In 2010, studies limited to identifying select genes involved in the HBOT mechanism. To gain a more global view of the genomic response of human microvascular endothelial cells to HBO, the group performed a microarray analysis of gene expression.

Using these data, they sought to identify the antioxidant and cytoprotective genes induced by HBOT and whether or not their induction could protect cells against lethal oxidant stresses. In addition, they identified the cellular pathways predicted to undergo dramatic changes following HBOT treatment, based upon the number of up- and down-regulated genes in each pathway.

Their results indicate that HBOT can change gene expression in a number of cellular pathways, including the Nrf2, Integrin, and ERK/MAPK pathways. These pathways contain a number of genes that are critical in cellular defense. The functional significance of these gene expression changes is supported by their finding that HBO-treated cells are protected against an otherwise lethal oxidative stress.

These findings support the potential benefit of HBOT in a number of clinical applications. For example, a pre-conditioning HBOT treatment may be an attractive option for patients about to undergo particularly stressful operations, including open-heart surgeries. A recent study has demonstrated the ability of HBOT pretreatment to protect humans from acute ischemia during coronary artery bypass grafting procedures employing cardiopulmonary bypass.

More generally, HBOT could be a viable treatment option to slow aging because of its ability to increase endogenous antioxidant enzymes that suppress ROS-induced cellular damage. Investigators showed that after just one round of HBOT, expression of these protective genes increases significantly, and this single treatment protects cells against a ROS insult. Overall, HBOT is a relatively low-risk procedure that could be effectively applied as a broader preventative regimen to reduce the effects of aging.

The doctor wanted to link these cell culture studies with human studies to demonstrate that HBOT-induced gene expression changes also occur in patients where they provide a similar level of protection. Analysis of the gene array data also show that HBOT can stimulate proliferation of HMEC-1 cells through the activation of growth-regulatory genes. Endothelial cell proliferation is an important component of angiogenesis and wound healing, both of which decline with age.

Their results also support the idea that HBOT is a hormetic agent that activates antioxidant and cytoprotective genes to later protect against a lethal insult. Of the hormetic agents that have been proposed for human use as antiaging treatments, HBOT has the advantages of minimal side effects and a track record of safe FDA approved use for a variety of indications. To be effective, this treatment likely depends upon reversal of age-related declines in Nrf2 signaling.

If studies in rats like those described above are applicable to humans, HBOT becomes an appealing anti-aging therapeutic option for the human population. However, according to the investigators, additional research is required to establish the beneficial effects of HBOT in humans and to devise specific clinical protocols that maximize protective responses of this hormetic treatment.