Hyperbaric oxygen as an adjunctive therapy in treatment of malignancies 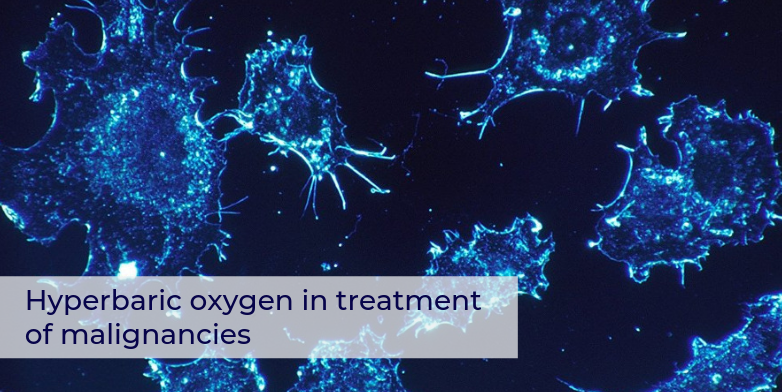 One of the major issues contributing to the ineffective medical treatment of cancer is the occurrence of local hypoxia within the central tumor areas. The application of hyperbaric oxygen therapy (HBOT) may help overcome the problem of oxygen deficiency in the poorly oxygenated regions of the neoplastic tissue. To date, several reviews on the use of HBO in cancer treatment have been published. In the article “Hyperbaric oxygen as adjunctive therapy in the treatment of malignancies, including brain tumors”, Katarzyna Stepien, Robert P. Ostrowski, and Ewa Matyja present some of them:

It was observed that mice breathing pure 1 atm oxygen required a one-third smaller dose of X-rays than mice that were breathing air to achieve similar cancer regression. HBOT might play two possible roles when combined with RT: it may act as a radiosensitizer, which enhances the effect of radiation, or it may act as a therapeutic agent, reducing delayed radiation injury. A combination of HBOT and radiotherapy reduces tumor growth and improves local tumor control, resulting in increased survival time.

Watson et al. conducted a clinical trial on 320 cervical carcinoma patients to investigate the influence of radiation in combination with HBOT. Both local tumor control and patient survival in the HBOT group were significantly better than in the control normobaric group.

Cade and McEwen enrolled 505 patients with various types of cancer into a clinical trial investigating the impact of HBO with radiotherapy. Low doses of radiation provided a weak therapeutic effect; however, administration of a maximum dose along with high-pressure oxygen improved the survival of the patients with cervical or bronchial carcinoma in comparison with patients who were irradiated in normal air.

Henk et al. obtained similar results in a clinical trial of head and neck cancer treatment in which HBO was used as a radiosensitizer. Local control of the tumor was improved in the HBO-treated group.

The mechanism of action of certain cytostatic drugs is based on the production of reactive oxygen species (ROS). ROS are formed as a result of oxidative stress in eukaryotic cells, triggered by either insufficient or excessive levels of oxygen in tissue, by radiation, by toxins, or by other adverse factors. ROS cause cellular damage via oxidation, and this has been implicated in the pathogenesis of many diseases. Increased production of ROS results in DNA strand damage, apoptosis, and cell death.

However, the very frequent DNA mutations and impairment of apoptosis lead to the development of highly anaplastic, therapy-resistant, neoplastic cells that are capable of causing local tumor recurrence and/or distant metastases. Moreover, cancer cells develop effective mechanisms that can help them to avoid the toxic effects of free radicals, although the amount of ROS tolerated by neoplastic cells is limited and above certain levels of oxidative stress or during prolonged exposure, the self-defense mechanisms become overwhelmed and cell death occurs. Administration of HBOT can be therapeutically advantageous by providing additional oxygen molecules and thereby increasing chemotherapy-generated oxidative stress.

Alazog et al. examined the effect of cisplatin treatment on ovarian cancer in mice xenografts under HBOT administration and found that HBOT improved tumor vascularization and, when combined with cisplatin, diminished the tumor growth more effectively than cisplatin alone.

In a study performed on sarcoma cells in vivo, Takiguchi et al. assessed the therapeutic impact of HBOT alone as well as in combination with 5-fluorouracil (5-FU. The combination of 5-FU and HBO together significantly slowed the progression of tumor growth in comparison with both the control group and the group treated with administration of 5-FU alone.

Hypoxic regions within the tumor mass play a major role in tumor development and resistance to novel radio- and chemotherapies. HBOT holds promise as an approach to overcoming oxygen insufficiency by increasing the oxygen supply to neoplastic tissue. Recent results strongly indicate that HBOT does not induce cancer growth, recurrence, or metastasis. Indeed, HBOT is observed to exert an inhibitory effect on cancer cell proliferation and to stimulate cancer cell apoptosis. However, the beneficial effect of HBOT is diverse, and it varies with the tumor type, malignancy, size of the lesion, and the clinical state of the patient.

It is dependent on the specifics of the oxygenation protocol, and consequently, it is very important to establish the proper moment of application, duration, pressure, and number of doses. The administration of HBOT can provide many clinical benefits in the treatment of tumors, including management of highly malignant gliomas.

The results obtained with a combination of HBO/radiotherapy protocol proved to be especially favorable compared to radiation treatment alone. HBOT can also increase the cytostatic effect of certain drugs, which may render standard chemotherapy more effective. The currently available data support the legitimacy of conducting further research on the use of HBO in the treatment of malignancies.