Homeespañol ingles eslovaco How does the hyperbaric chamber help to treat burns?

How does the hyperbaric chamber help to treat burns? 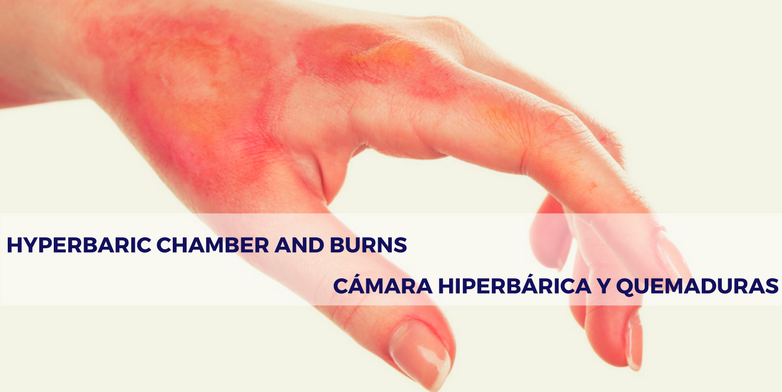 A burn is an injury to the skin or other organic tissue caused mainly by heat or radiation, radioactivity, electricity, friction or contact with chemicals.

According to WHO data:

Thermal burns occur when some or all of the skin cells or other tissues are destroyed by hot liquids, hot solid objects or flames. Physiological responses to a major burn include a fall in blood pressure, tachycardia, a progressive decrease in stroke volume. Metabolic responses are complex and include metabolic acidosis and hyperventilation. The levels of adenosine triphosphate decrease, the resting potential of the cell membrane decreases and there is an intracellular accumulation of sodium, calcium and water parallel to a loss of potassium.

Immunological responses include impaired macrophage function and disturbance of cellular immunity. The wound by burn is a complex and dynamic lesion characterized by a zone of coagulation, surrounded by an area of stasis, and bordered by an area of erythema. The complete coagulation zone or capillary occlusion may progress during the first 48 hours after the injury. This phenomenon is three-dimensional; therefore, the wound may increase in size and depth during this critical period.

The microcirculation is compromised from 12 to 24 hours after burning. The burns are in this dynamic state of flow until 72 hours after the injury. Ischemic necrosis follows quickly. The formation of edema is quick in the area of secondary injury. Edema is more prominent in directly burned tissues but also develops in distant uninjured tissue, including muscle, intestine and lung. Changes occur in the distant microvasculature, including the aggregation of red blood cells, white blood cells, adhesion to the venular walls and platelet thromboembolism. This progressive process can dramatically extend during the first days after the injury.

How does the hyperbaric chamber help?

In the article Hyperbaric oxygen therapy attached in the treatment of thermal burns, Paul Cianci presents several studies of thermal injuries that support the use of hyperbaric oxygen to prevent skin ischemia, reduce edema, modulate the zone of stasis, prevent the conversion of partial thickness to complete, preserve cellular metabolism and promote healing.

Most clinical reports have shown a reduction in mortality, the length of hospital stay, the number of surgeries and the cost of care. It has been proven that hyperbaric oxygen is safe in the hands of those who are well trained in the provision of therapy in the intensive care setting and with adequate monitoring precautions.

Hyperbaric oxygen therapy is recommended to treat severe burns that cover more than 20% of the total body surface and with the participation of the hands, face, feet or perineum.