HBOT in intoxications by poisonous animals 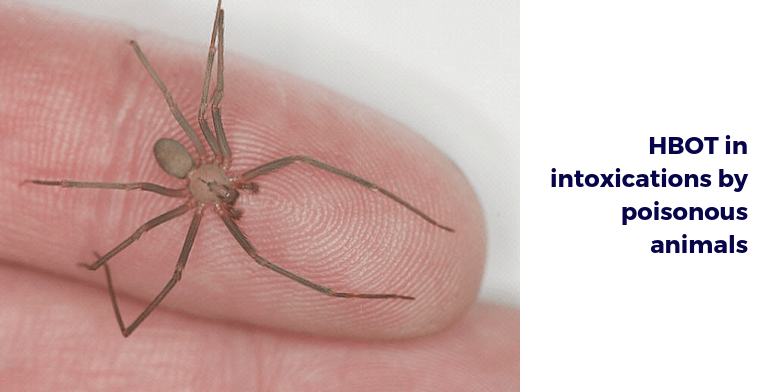 Viperidae Snake bites are the most frequent in Argentina (Northwest and Northeast). They cause cellulitis and compartment syndrome with systemic toxicity.

The Viperidae, family Viperidae, are poisonous snakes among which the popular vipers and rattlesnakes (crotalus) stand out. These reptiles have undergone a special adaptation in their poison-carrying device, which is highly evolved. The grooved fangs of its maxilla are curved and mobile, they can retreat or rise vertically when they act in front of their prey, secreting venom that have hemotoxins or neurotoxins according to the species of vipérido in question.

The Viperidae family, Vipéridos, is composed mostly of viviparous snakes, with terrestrial habits, they are not usually arboreal, although certain groups can be considered as excavators. In many species the poison has a remarkable danger for man.

In the clinical trial “A Multidisciplinary approach with hyperbaric oxygen therapy improve outcome in snake bite injuries”, there were presented 112 cases of snake bites that were derived to plastic surgery. In all cases, the hyperbaric chamber was included in the multidisciplinary treatment.

Highlights the case of a girl of five years with compartment syndrome. She was treated with six sessions of hyperbaric chamber and surgery was not required. On the other hand, there were cases with loss of soft tissue in which flap and skin graft was performed. Hyperbaric oxygenation treatment was included in postoperative.

There was no need to perform fasciotomy in any of the 112 cases treated with hyperbaric oxygenation treatment.

On the other hand, spider poisonings of the genus Loxosceles are very frequent in Chile and some provinces of Argentina. They cause severe skin lesions and, in some cases, cause systemic involvement and death.

The loxoceles spider, better known as a corner spider, measures ~ 13 cm in length (including the legs), is brown and has a violin-shaped spot on the back of the cephalothorax, which can vary in hue (from dark brown to yellow). The Loxosceles laeta has only three pairs of eyes, a characteristic that is useful for its identification.

It is located mainly in Central and South America, but has also been seen in California and northern Canada. The poison is injected from the salivary glands through the chelicerae. This poison is composed of sphingomyelinase D, the main dermonecrotic and hemolytic factor, along with other enzymes, including hyaluronidase, proteases, collagenase, esterases, phospholipases, deoxyribonuclease and alkaline phosphatase, which helps spread the poison and has a role in chemotaxis, necrosis and platelet aggregation.

It is difficult, however, to relate individually each of the components of the poison with the severity of the clinical picture. Apparently, the quantities of these components by themselves are insufficient to produce loxoscelism. The autopharmacological reaction is more important (the response of host cells to the presence of a foreign substance through the complement) and polymorphonuclear leukocytes (PMN) have an important role in the development of cutaneous loxoscelism.

In the animal model “Brown Recluse Spider Envenomation: a prospective trial of hyperbaric oxygen therapy”, it was observed that with hyperbaric oxygenation treatment there was greater scarring of the wound and less damaged tissue, as well as a lower amount of enzyme of the poison.

In the case report “Nonhealing wounds caused by browns spider bites: application of hyperbaric oxygen therapy”, three patients were treated 2 to 3 months after the bite with chronic refractory ulcerations. With hyperbaric oxygenation treatment, these ulcerations healed.