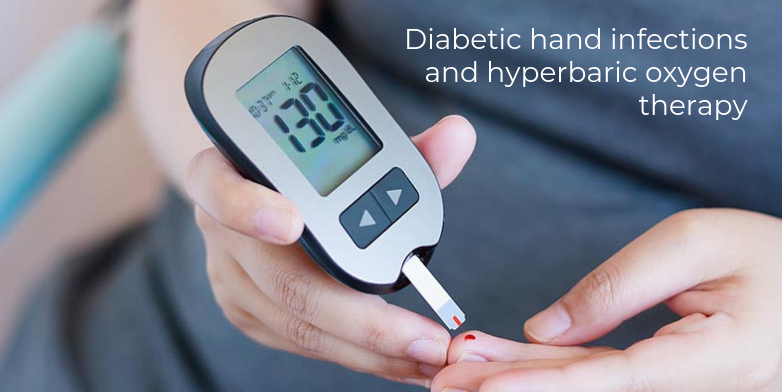 According to the World Health Organization (WHO), 346 million people have diabetes worldwide and the number of diabetics is predicted to double between 2005 and 2030. Foot ulcers are one of the most important complications of diabetes and cause high rates of amputation. Diabetic hand infections are observed less frequently than foot infections. Hand infections related to diabetes have mostly been reported in studies of African origin.

These ulcers are usually associated with traumas and progress quickly; gangrene of the extremity causes increased rates of morbidity and mortality. Hand infections are also seen in the diabetic population outside the tropical regions. Hand problems such as limited joint mobility, Dupuytren’s contraction and trigger fingers have been reported in diabetic patients. Such problems related to the musculoskeletal system in the hands of diabetic patients could be defined as a syndrome.

Hyperbaric oxygen therapy (HBOT) is thought to help wound healing by increasing the amount of oxygen in the skin and peripheral tissues via 100% oxygen with more than 1 atm of pressure and also is known to stimulate angiogenesis by high tissue oxygen tension, increase cellular proliferation, minimize necrosis and help in the prevention and treatment of infections.

Vasoconstriction is another effect of HBOT that decreases edema. The anti-infectious effect of HBOT on ischemic and hypoxic tissue is provided by the correction of low PO2 values. It has a bactericidal effect on anaerobes and microaerophilic aerobes; and it also repairs microbicide effects which are provided by oxidative pathways, regulating macrophage functions and covering oxygen consumption at infected tissues.

Aydin and Cols. did a retrospective study that included 10 patients (8 males, 2 females) with diabetic hand infection treated with HBOT in addition to the standard methods between January 2006 and February 2011. Mean age was 54.9±7.43 years with a duration of diabetes of 8.7±6.44 years.

Physical examinations were performed during admission. Biochemical tests were performed by taking samples for routine blood studies before treatment. Deep tissue samples were taken from the ulcers for culture investigation. Daily wound care of all patients were done. Amputations, small debridements, incisions, and drainage were performed when necessary.

Hyperbaric oxygen therapy was applied. None of the patients had any contraindication to HBOT. The starting time of the patient’s HBOT was an average of 40±29 days after injury. Each treatment session lasted 120 minutes. Sessions were carried out once a day and 6 days a week. Informed consent was obtained from all patients.

All patients had edema, hyperemia, pain, and limitation of movement in the hands at the initial examination. Most cases had a purulent discharge. Deep tissue infection was expanded to the bones and tendons in 5 cases. There was localized gangrene in the finger of 2 cases and deep ulcer without bone involvement in three. According to the Wagner classification, 2 of the ulcers were Wagner Grade 2, 5 were Grade 3 and 3 were Grade 4 ulcers.

The main pathogen detected in the deep tissue samples was Staphylococcus aureus. The second most common agent, Pseudomonas, was considered to be resultant from hospital infections related to previous surgical interventions. Six patients received treatment as outpatients and 4 were treated and followed in the hospital due to systemic infectious findings. Patients had undergone a total of 5 surgical interventions.

Eight recovered without amputation, minor amputation was performed in two. In these 2 patients, gangrene was detected in the right-hand index finger in one of the newly diagnosed DM cases and necrotizing infection in the deep tissues in the other. The level of amputation was at the proximal interphalangeal (PIP) joint of the right-hand index finger in one and the distal phalanx of the left-hand middle finger in the other case.

Hyperbaric oxygen therapy begun an average of 40±29 days after injury and no statistical significance was found between the starting time and prognosis (p=0.231). HBOT was continued until healing was completed. Total epithelialization of the ulcer area was accepted as healed, either with surgical or nonsurgical secondary closure. Patients underwent an average of 35.3±14 HBOT sessions.

An increased number of sessions was related to increased Wagner scores of wounds and delayed admission to medical management. None of the patients developed any complication related to HBOT during treatments and all ulcers were healed. In conclusion, the addition of HBOT to standard therapies is a safe method for the treatment of hand infections in diabetic patients due to its anti-infective effects.