Cerebral oxygenation and the recoverable brain 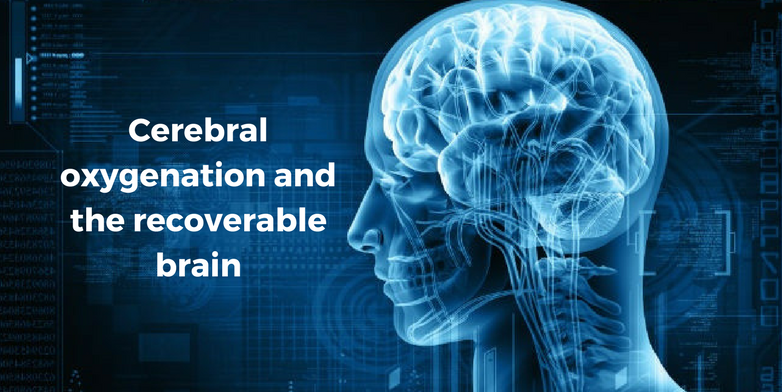 Stroke is the third leading cause of death in the United States and a major source of disability. It is not only devastating to the patient and the family, but also creates a large financial drain on resources. In stroke it is often stated that most recovery takes place in the first three months. However, sequential SPECT scanning has indicated that some recovery may take place spontaneously up to six months. Although stroke tissue in th ecenter of the lesion becomes necrotic, in the surrounding zone of tissue, less affected by hypoxia, cells survive to form the ischemic penumbra.

The timing of these events is uncertain but sufficient oxygen is available to these cells to maintain membrane ion pump mechanisms, but not enough for them to generate action potentials and therefore function as neurons. The existence of such areas has been suspected for sometime based upon the nature of clinical recovery, but has now been demonstrated by SPECT imaging using a high plasma oxygen concentration under hyperbaric conditions. The use of hyperbaric oxygen therapy has been described in a large series of stroke patients.

A 74 year old male patient experienced the acute onset of right-sided weakness, dizziness and slight confusion. Within 3 hour of the onset, the patient had a SPECT scan. A quarter dose was administered for the firsts can and the patient was then given oxygen in a hyperbaric chamber at 1.5atm abs for 1 h. The remaining three-quarter dose was administered and scan was repeated after 2h. The original scan showed a marked reduction of perfusion in the territory of the left middle cerebral artery. There was reduced perfusion in the left temporal lobe of the basal ganglia, the posterior occipital poles and throughout the lower gyre of the frontal lobes, again worse on the left. The follow-up scan after hyperbaric oxygen and the remaining three quarter dose showed a marked improvement in perfusion and metabolism of the left mid-cerebral artery.

A repeat scan was performed after 6 weeks following a total of 16 hyperbaric treatments, but one and a half months after final treatment, it showed a holding pattern with even further overall improvement. No neurologic deficits were noted. It must be noted that because the symptoms may have resolved within 24 h this could be classified as a transient ischemic attack. However the use of a split dose SPECT with hyperbaric oxygenation made it possible in this case to make rational prediction of the extent of his final recovery. The patient was therefore treated at home with physical therapy as well as HBOT. If such a treatment were established for patients during the transient ischemic attack, or as an effective modality in stroke, hospitalization may be avoided, the outcome significantly improved and costs dramatically reduced.

A 14 year old diabetic girl with an encephalopathy resulting from severe hypoglycemia and prolonged seizures 6 months previously had been diagnosed with labile juvenile diabetes at age 5,and had experienced multiple episodes of hypoglycemia. At the time of the last incident, she was found convulsing and was unresponsive to two injections of Glucagon. The seizure became continuous and she was hospitalized and intubated in the ICU. She was in coma for about 1 week and when seen had begun walking but her speech was poor. She was agitated and combative with violent rages. She had no use of her left hand and could not grasp with her right. Baseline SPECT showed a diffuse cerebral deficit pattern consistent with a severehypoxiceffect’.Following88 hyperbaric oxygen sessions a repeat scan showed ‘diffusely improved cerebral perfusion’. After treatment it was obvious that this patient had made significant progress. She is now calm, gets on the school bus herself daily and attends a special school

A 22 year old boy was seen 11 1/2months after a near-drowning episode. The child hit his head and fell into the swimming pool. It is not known how long he was submerged. The family was told that the child was blind and he presented in a persistent vegetative state with severe spasticity on the left side and hypomobility of the right leg. He was fed by PEG tube. Initial SPECT imaging showed extensive and symmetrical deficit throughout frontal, temporal, parietal and occipital lobes. After three treatments with hyperbaric oxygen therapy the patient began moving more, trying to speak, and ‘acting up’ when angry. The patient began crying with tears for the first time after 16 treatments. After 26 treatments the atient was smiling, much more alert, laughing, crying, sleeping much better and laughing while dreaming. Following 34 treatments the patient was more aware, developing much more eye contact and was clearly not blind. To date the patient has received 154 treatments and now sees clearly, is speaking bilingually, standing and taking a few steps. He is now able to eat and drink normally.

Richard A. Neubauer and Philip James (1998); Cerebral oxygenation and the recoverable brain.