Application of HBOT in Otorhinolaryngology 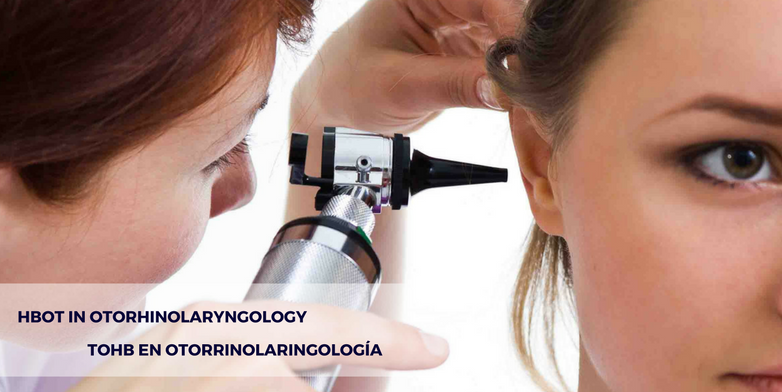 In the last 50 years there have been investigated the possible applications of treatment with Hyperbaric Oxygenation in the otorhinolaryngological field and in the hypoxic processes secondary to radiotherapy (radionecrosis, osteonecrosis, osteomyelitis), infections (malignant otitis externa, fasciitis) or vascular disorders (sudden hearing loss syndrome).

Sudden hearing loss is defined as a disease in which there is a sensorineural loss of at least 3 consecutive frequencies of more than 30 db in a range of 72 hours. Only in 10% of cases is defined an etiology of the process, while the rest have an idiopathic origin.

The vascular origin of the disease made it suspect that treatment with hyperbaric oxygenation could be indicated in this type of disease.

The benefits of hyperbaric oxygenation are based on:

According to a study carried out by professionals of the Mataró Hospital and the Hospital de la Creu Roja in Spain, the adequate use of hyperbaric oxygenation for sudden hearing loss would be a rescue treatment in those cases that, after 10 days of conventional treatment, did not show improvement of process.

It is defined as an auditory sensation of a persistent and involuntary sound that is not generated outside. It is usually associated with hearing loss. The different studies on the benefit of hyperbaric oxygenation in tinnitus show improvements.

In some studies, a psychological effect of HBO on tinnitus is noted. The best results have been obtained when the treatment is established in the first month and a half after the appearance of tinnitus, or if it is associated with acoustic trauma or sudden hearing loss.

Acute acoustic trauma is defined as the loss of hearing caused by intense sound pressure, which causes a loss in the cilia of hair cells, the breakdown of cell membranes, the detriment of blood supply or the loss of potentials Cells for the hypoxia they experience.

The studies show a significant improvement in the recovery with the complementary hyperbaric oxygenation treatment.

It usually occurs in immunosuppressed patients, whether they are poorly controlled insulin-dependent diabetics or patients with immune system diseases. It is initiated by an infection in the skin of the external auditory canal, which is not resolved due to the immune state. Osteomyelitis leads to nerve lesions and subsequently to invasion of the skull base to brain complications.

Treatment with hyperbaric oxygenation has been shown to be effective for osteomyelitis and osteonecrosis of the jaw, Ménière’s syndrome, the reception of osseointegrated implants in irradiated patients and laryngeal radionecrosis.

The treatment in hyperbaric chamber is based on the increase of the partial pressure of oxygen in the tissues. This increase has positive physiological repercussions on tissues, such as increased cell regeneration, increased bactericidal action. The large increase in the partial pressure of O2 in the plasma allows direct diffusion through the tissues, reaching areas of poor capillary permeability and hypoxic.